Veneer for wrapping profile, its properties and manufacturing technology

Often in the furniture industry, to bring the detail into a beautiful aesthetic appearance, use the method of wrapping the part with veneer. Natural veneer is used in the manufacture of high-quality furniture.

Sliced ​​veneer — this is a thin sheet of wood, which is obtained by cutting from a beam of fibers on the sprocket.

The veneer intended for wrapping differs from the planed veneer and is called dubbed. It is thinner, that is, its thickness is less than 0.4 mm and before the use veneer passes special additional processing: straightening in the press and sticking the reverse side non-woven fabric (fleece). Fleece provides an unobstructed penetration of the glue to natural veneer when the material is glued to the substrate. This veneer is polished three times on the front side, so after wrapping the part does not need to be further processed.

Profile wrapping veneer is most often produced from such types of wood as oak, beech, mahogany, etc. The workpiece for the veneer for wrapping profile is the planed veneer, which is spliced ​​along the length with a dentate mating. Duplicated veneer in rolls has a relatively low price and high environmental quality, as it does not pass the treatment with chemicals. Duplication reduces or completely eliminates the cracking of veneer in the places of its bends, as well as chipping when removing chamfers at the edge when facing relief details.

Stages of the technology of manufacturing of double-rolled veneer:

In order to start wrapping veneer with veneer, glue is selected. When choosing a glue for wrapping, you need to pay attention to its properties such as temperature resistance, moisture resistance, and also the duration of its curing period. The shorter this period, the higher the quality of the glue, because it is very important that the veneer is glued to the part instantly.

Glue-melt adhesives have the shortest period of productivity, so they are often used for facing with veneer for wrapping profile.

Polyurethane adhesives also apply to hot melt adhesives, in their case, curing is due to air humidity, and subsequently they can not be reactivated. Such adhesives have a high cost, but they compensate for it with low consumption, as well as high resistance to temperatures and humidity.

Apply glue adhesives based on PVA dispersion to gluing veneer, but they slowly harden, so they are not the best options for facing parts with veneer for wrapping profile in furniture production.

In order to get the result of a quality wrapping of the part with veneer you need:

Veneer for wrapping profile — this is the material without which no furniture company today will cost. Veneers are used for interior surfaces of furniture, individual parts, end faces, window frames and door frames.

«Euroshpon-Trade» company offers quality sliced veneer and veneer for wrapping at an affordable price. Also you can purchase from us high quality glues with a good level of performance for veneering with veneer. We work both with small firms and with large enterprises, we individually hold necessary consultations and offer favorable conditions for cooperation.

Request a call back

Do you have a question for us? Leave your contact details and we will contact you shortly. 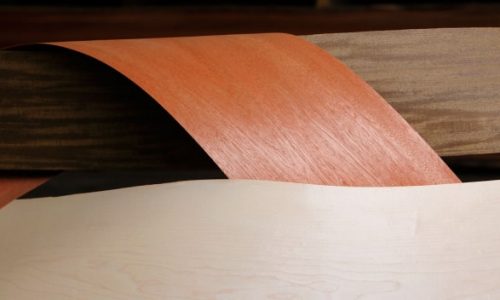 Do you have a question for us? Leave your contact details and we will contact you shortly.